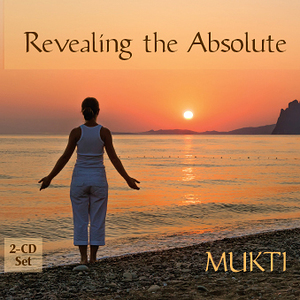 When presented with concepts of "absolute" and "relative," listeners often associate the term absolute with a movement toward transcendence, a movement motivated by desire to leave behind the limitations of the relative world. When interpreted in this way, the very notion of absolute tends to proliferate a preference to avoid difficult experience and to actually reinforce dualistic experiences of feeling both liberated and bound.

In this CD set, Mukti explores the absolute as That which is beyond all opposites, one's eternal nature that is inherently void of notions of freedom or bondage. Through this potent talk, insightful dialogues, and a guided meditation, she encourages a giving way to the absolute wholeness of being and to seeing life unfolding as a grand mystery.

Quotes from this CD Set:

"True spirituality is not taking sides for the transcendent or immanent experience."

"In being attracted to openness, the sense of a dualistic paradigm can be further embedded in one's pattern of seeking."

"When you sense into emotions, do it as if you're getting to know them. You can do it softly, not like an archeological dig, but like a whisper saying, 'I'm here'...and they can then reveal themselves to you."