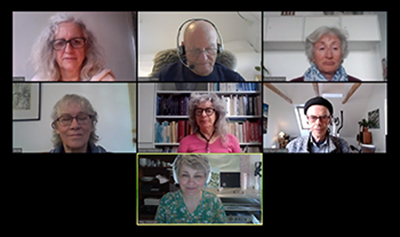 I promised to write a testimonial about our Gathering here in Copenhagen and began writing a draft. I realized, however, that although the group is still active, we are in transition, making it not really the best time—or really representative of what we have been doing. But then I thought, why not talk about what we are doing?

A group of seven of us took Adya’s online retreat, A Revolution of Being ~ 2020, as a group and met weekly through Zoom. We’ve also had two at-home silent meditation days with a Zoom meeting before and after.

Denmark is slowly opening up—with restrictions—and we decided to follow along to some degree. We’ve planned a live silent day at the end of this month with five members meeting in a large home and two to four more members joining virtually from their own homes.

We will also continue with regular meetings on Zoom one or two more times, and after that we will consider meeting live—with some limitations. All of these things are decided by consensus. 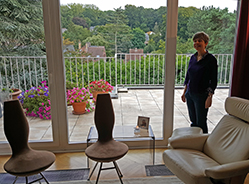 I felt called to host an Adyashanti group in my country after attending my third silent retreat with Adya in 2016, to bring a small contribution to the Sangha by providing a space in my home for regular gatherings and to meet local followers of these teachings.

It took two years to set up the first meeting—some seeds need time to germinate. During these two years I responded to a dozen emails of people interested but when it came to set a date, faith and persistence were needed. Finally, in October 2018 our first meeting took place, and since then we have been meeting every 6 to 8 weeks, depending on people’s busy schedules.

Eight people are on my current email list. We are on average six when we meet. A very mixed group: five nationalities, ages from 32 to 82, men and women, different careers and life paths. What is maybe unusual is that at least half of the attendees follow mainly another spiritual path and that we are a bilingual group, constantly switching from English to French, depending on which language each person is more comfortable with. We spend most of the two hours sharing our experiences and challenges on the spiritual path; our latest meeting was for somehow to manage the transition from retreat back to daily life and work. We also meditate together.

There have been challenges for me, from the minor how to set up a Doodle to more soul-searching questions such as am I ready to welcome strangers in my home and what is my role as host. If I have not been sanctioned to teach, what is my influence here? How to exert my role as host wisely: set guidelines, manage a group, time keeping, holding a safe space for all. After each meeting I am still left with the angst, was that OK? . . .

It has been so far a very rewarding experience, I have met some wonderful people and witnessed beautiful intimate sharing in the healing space of a benevolent group that listens without judgment or quick fixes. The group meditation also leaves lingering a peaceful energy in my living room after the guests have left, a blessing.

By Mary Morgan and Shoshana Helman

Our Gathering meets every Saturday morning from 10:30 am to 12:30 pm. Our location is generally centered in the Palo Alto area but rotates locations from Pacifica to Morgan Hill, depending on who is hosting that week. (A group email goes out mid-week with location information.) We have had people from as far away as Napa and Berkeley, but most often have people coming from San Francisco and San Jose.

We first started the group in March of 2016, so we have been active for three years.

The group can vary in size from 4-12 people and have an average of around 7 people each week. Since there is no requirement to attend regularly, and we meet so often, the actual group is always somewhat different than the week before. It’s a great mixture.

We open with 30 minutes of silent meditation, followed by the week’s topic, then group discussion, then we close with 5 minutes of business, and 5 minutes of closing meditation. Occasionally we vary this with one of Adya’s or Mukti’s guided meditations.

We only ask that people attend when they can arrive on time and participate for the full two hours. The person who hosts does not have to also run the meeting. Both those jobs rotate based on volunteer participation.

Finally, because we are local, we often try to carpool to Adya or Mukti events in the Bay Area.

Below is an offering of a poem by Mary Morgan:

Selling the Tongue for a Thousand Ears

This that is being called forth is not imagination.
It is the opening of eyes long closed.

When we sit in stillness,
There is movement making its way up and into form.

Words are no longer needed.
Allowing everything to unfold as it does.

Being the Presence where every transformation takes place.

Listen. Listen and realize.
No need to teach or give advice.

Listen with a deep listening.
Selling the tongue for a thousand ears.

Open. Open to everything that is waiting.
Become that opening.

Gratitude comes and judgement holds no more interest.
Joy and Sadness are one.
Neither to be grasped or rejected.

Amazing Grace comes.
Bowing to that One which cannot be named.

You are that Amazing Grace, the bowing, and the ONE.
And I am you. 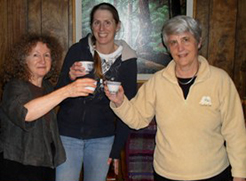 It has been my great pleasure to have held Adyashanti Gatherings in my home in Langley for many years. Along with many kind volunteers, for many years, we have also hosted the mail-out parties for Open Gate Sangha's Retreat and Newsletter brochures, which were sent out across Canada. This often included people who travelled from Vancouver, but for regular gatherings, most people have come from within a 15-mile radius.

The usual format would include a brief meditation at the beginning, followed by the viewing of a DVD or sometimes an online course. We would finish with another brief meditation. Sometimes this would simply end with people leaving in silence after the meditation, and sometimes we would socialize a bit. A simple meditation session has also been offered.

Most recently, our home usage has shifted a bit, and the space normally available for the gatherings is no longer available. At this point the gatherings are not offered, but in time, it may change again. Since I have a small home yoga studio, a meditation day may be offered.